Thermodynamics, as the word suggests, is the heat in motion. The systems related to the usage of heat for doing work. Every system was observed and accordingly, laws were framed for categorizing many such processes.

(i) Isolated system: This type of system does not allow the transfer of both matter and energy. Thermos flask is an example of an isolated system.

(ii) Closed system: This type of system allows transfer of energy as heat and work, but not of matter. For example, a closed teapot.

(iii) Open system: This type of system allows the transfer of both matter and energy. A hot cup of tea is an example of an open system.

State of a system and State Variables

Macroscopic properties such as pressure, temperature, volume, amount, etc. which determine the state of a system are referred to as state variables or state functions or thermodynamic parameters. The change in the state properties depends only upon the state of the system and independent of the path followed.

(i) Isothermal process: In this process, the operation is done at a constant temperature. dT = 0 thus DU = 0 .

(ii) Adiabatic process: In this a process there is no exchange of heat takes place between the system and surroundings. The system is thermally isolated, i.e., dQ = 0.

(iii) Isobaric process: The pressure of the system remains constant throughout the process i.e., dP = 0.

(iv) Isochoric process: The volume of the system remains constant throughout the process, i.e., dV = 0.

(vi) Reversible process: A process which is carried out infinitesimally slowly, so that all change occurring in the direct process can be reversed and the system the surroundings remain in the state of equilibrium is said to be a reversible process. It is an ideal process.

Internal energy (U) is the total energy within a system. It is the sum of all types of energies (chemical, electrical, mechanical or any other type) of the system and is a state function.

It is neither possible nor necessary to calculate the absolute value of internal energy of a system then, DU = Uf - Uin; DU is positive if Uf > Uin and negative if Uf < Uin.

The energy of a system may increase or decrease in several ways but two common ways are heat and work.

Work is said to be performed if the point of application of force is displaced in the direction of the force. It is equal to the force multiplied by the displacement (distance through which the force acts).

It was introduced after the 1st and 2nd law and thus got its name.

The change in internal energy can be brought about in two ways.

(a) Either by allowing the heat to ﬂow into the system (absorption) or out of the system (evolution).

(b) By doing work on the system or the work done by the system.

Therefore, we can state that the change in the internal energy of the system is equal to heat absorbed plus work done on the system.

The change in internal energy of the system is equal to heat absorbed minus work done by the system.

Energy is conserved; it can be neither created nor destroyed.

Therefore, it can be summarized as: dU = dq + dw

Or Mathematical statement: ∆U = q + w

Clausius statement of 1st law: The energy of the universe is conserved.

Work is defined as a movement against force. It is a mode of energy transfer to or from a system with reference to surroundings.

Mathematical Expression: If an object is displaced through a distance l against a force F, then the amount of work done is defined as expansion work.

Work associated with the change in volume of a system against external pressure is called mechanical work.

Where Pext =External pressure, ∆V =increase or decrease in volume.

‘-’ Sign is required when W>0 Positive work and ∆V<0. This indicates that Work is done ON the system BY the surroundings

‘+’ Sign is required when W<0 Negative work and ∆V>0. This indicates that Work is done BY the system ON the surroundings

If Pext is not constant, then we have to look at infinitesimal changes. dw = - Pext dV (d means this is not an exact diﬀerential)

According to first law thermodynamics,

Total amount of work done by the isothermal reversible expansion ideal gas from volume V1 to volume V2 is,

Work done for Isothermal Compression: It has the exactly same value as that of isothermal expansion but with opposite sign.

(a) Expansion of gas in vacuum i.e. at zero external pressure, the system will give zero work.

Considering a system at constant pressure, the amount of heat which is released or absorbed is termed as Enthalpy. The change in enthalpy for a specific process is actually the change in internal energy associated with the changing volume.

and an extensive property.

(i) Intensive properties: The properties that are independent of the quantity of matter or size of the system are called intensive properties. Its examples are pressure, temperature, density, specific heat, surface tension, refractive index, viscosity, etc.

If heat is absorbed by the system, q= +ve

If heat is released by the system, q= -ve

Let dq be the amount of heat given to a system and the temperature of the system rises by dT. Heat capacity= dq/dT

Relationship between Cp and Cv for an ideal gas

For a constant pressure process, the first law of thermodynamics gives:

The difference between CV and Cp  can be derived for an ideal gas as:

On putting the value of ∆H and ∆U, we have

It is done in a bomb calorimeter.

∆U = C x ∆t x M; where m is mass of substance taken, M is its molar mass, C is the heat capacity of the calorimeter and ∆t is the rise in temperature. 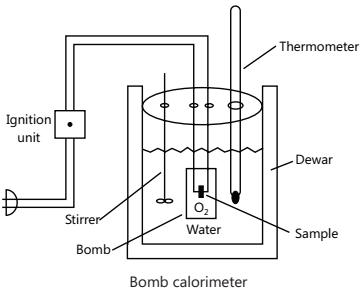 The reaction is carried out in an insulated vessel (calorimeter) directly and rise or fall in temperature is noted down depending upon whether the reaction is exothermic or endothermic.

The enthalpy change accompanying a reaction is called reaction enthalpy.

where ai and bi is the stoichiometric coefficients of the products and reactants respectively.

The definition of the standard enthalpy of formation is the change in enthalpy when one mole of a substance, in the standard state of 1 atm of pressure and temperature of 298.15 K, is formed from its pure elements under the same conditions.

The equation for the standard enthalpy change of formation:

(a) The physical state or the phase of the reactants and the products using the symbols s, l, g or aq (aqueous).

(b) The allotropic form (if any) of the reactant.

(c) It tells whether a reaction proceeds with the evolution of heat or with the absorption of heat, i.e. heat change involved in the system. Heat changes of the system, the heat of reactant and product are represented by ∆H, HR and HP respectively.

If a reaction takes place in several steps then its standard reaction enthalpy is the sum of the standard enthalpies of the intermediate reactions into which the overall reaction may be divided at the same temperature.

The standard enthalpy of combustion is the enthalpy change when one mole of a reactant completely burns in excess oxygen under standard thermodynamic conditions (although experimental values are usually obtained under diﬀerent conditions and subsequently adjusted). It is measured using bomb calorimetry, and have units of energy (typically kJ).

It is the enthalpy change (always positive) when one mole of a substance is completely dissociated into atoms in the gaseous state, under constant pressure and temperature condition.

Enthalpy of solution of a substance is the enthalpy change when one mole of it dissolves in a specified amount of solvent.

Enthalpy of a solution at infinite dilution is the enthalpy change observed on dissolving the substance in an infinite amount of solvent when the interactions between the ions are negligible.

It can be defined as the process which takes place by itself or by initiation.

Entropy (S) is a measure of the degree of randomness or disorder of the system. ∆S is related with q and T for a reversible reaction as:

For all the spontaneous processes, the total entropy change is positive.

Gibbs free energy (G) is the net energy available to do useful work.

∆G gives a criterion for spontaneity at constant pressure and temperature.

Effect of temperature on the spontaneity of reactions:

The entropy of any pure crystalline substance approaches zero as the temperature approaches absolute zero.

This article has tried to highlight all the important points of Thermodynamics in the form of short notes for class 11 students in order to understand the basic concepts of the chapter. The notes on Thermodynamics have not only been prepared for class 11 but also for the different competitive exams such as iit jee, neet, etc.