This article is prepared about Chapter 5 States Of Matter Class 11 Notes of Chemistry. The notes on states of matter of class 11 chemistry have been prepared with great care keeping in mind the effectiveness of it for the students. This article provides the revision notes of chapter 5: States of Matter chapter of Class 11 Chemistry for the students so that they can give a quick glance of the chapter.

Matter can be defined as anything that occupies volume and has mass. Matter can be classified into three states – solid, liquid and gas. Plasma is regarded as the fourth state of matter, which exists only at very high temperatures (at interiors of stars, 107 K). At very high temperatures, all gases become ionized, which results in the formation of the fourth state of matter, the so-called plasma state. Matter can undergo a change in its physical state or chemical composition.

The major factor that is responsible for the different behaviour of solids, liquids and gases is the nature of the interaction between the particles(atoms, ions or molecules) and the effect of thermal energy on the movement of the particles.

Intermolecular forces are the forces of attraction and repulsion between interacting particles (atoms and molecules) and are always much weaker than the chemical bonds that hold atoms of a molecule together.

Intermolecular attractions hold two or more molecules together. These are weakest chemical forces and can be of the following types.

These are electrostatic attractions between the oppositely charged ends of permanent dipoles. It exists between polar molecules and due to this force, gas can be liquefied.

It exists between polar and non-polar molecules.

It exists among the non-polar molecules like H2, O2, Cl2 etc. in solid or liquid states. Even in atoms or molecules which have no permanent dipole, instantaneous dipoles will arise as a result of momentary unbalances in electron distribution. London forces are extremely short range in action and the weakest of all attractive forces. The London forces increase rapidly with molecular weight, or more properly with the molecular volume and the number of polarizable electrons.

(i) Molecule should have a more electronegative atom (F, O, N) linked to H-atom.

(ii) Size of the electronegative atom should be smaller.

(iii) A lone pair should be present on an electronegative atom.

Thermal energy is the energy of a body arising from the motion of its atoms or molecules and is directly proportional to the temperature of the substance.

(1) Gases or their mixtures are homogeneous in composition.

(2) Gases have very low density due to negligible intermolecular forces.

(6) Gases do not have definite shape and volume like liquids.

(7) Gaseous molecules move very rapidly in all directions in a random manner i.e., gases have the highest kinetic energy.

(8) Gaseous molecules collide with one another and also with the walls of the container with perfectly elastic collisions.

(9) Gases can be liquefied if subjected to low temperatures (below critical) or high pressures.

(11) Gases undergo similar change with the change of temperature and pressure. In other words, gases obey certain laws known as gas laws.

Boyle’s law states that at a constant temperature, the volume of a given mass of a gas is inversely proportional to pressure.

Charles’s law states that at constant pressure, the volume of a given mass of gas is directly proportional to its absolute temperature,

Gay-Lussac’s law states that at constant volume, the pressure of a given mass of gas is directly proportional to its absolute temperature, i.e. P ∝ T ( V and mass of gas constant).

Avogadro’s law states that equal volumes of all gases under similar conditions of temperature and pressure will contain an equal number of molecules or vice versa, i.e. V ∝ n (at constant T and P)

Statement: At a given temperature, the total pressure exerted by two or more non reacting gases occupying a definite volume is equal to the sum of the partial pressures of component gases.

Where PA, PB, etc., are the partial pressures of individual gases if they were present alone in the same container of volume V (litres) and same constant temperature T.

The partial pressures can be calculated as follows:

The kinetic theory of gases (proposed by Bernoulli in 1738; developed by Clausius. Maxwell and Boltzmann) postulates the following:

(a) Gaseous molecules are considered to be point masses.

(b) The volume of a molecule of a gas is negligible as compared with the total volume of the gas.

(c) Gaseous molecules do not have appreciable attraction; hence, gases can be easily compressed and do not have a fixed shape and volume.

(d) Gaseous molecules collide with each other but their collisions are perfectly elastic, i.e. there is no net loss of energy.

(e) The average kinetic energy of a molecule is directly proportional to its temperature.

(f) There is no effect of gravity on the molecular motion.

(g) The pressure exerted is due to collisions with the wall of the container.

An ideal gas is a hypothetical gas whose pressure, volume and temperature behaviours are completely described by the ideal gas equation. Moreover, an ideal gas does not liquefy, but the case is exactly the opposite for a real gas, which can be analyzed by observing the deviation from an ideal gas.

The deviations from the ideal gas behaviour are expressed in terms of compressibility factor (Z), where Z = PV/nRT = PV/RT (for 1 mole) = VM/VM ideal, where VM is the actual molar volume of gas.

Variation of Z with P and T

The values of Z exhibit both negative deviation (Z<1) and positive deviation (Z>1). Exceptional behaviour of H2 and He: For these gases, experimental studies have revealed that PV>RT, i.e. Z>1 or VM>22.4L at NTP. The deviation is more prominent at high Pand low T.

Van der Waals pointed out that Maxwell had made two wrong assumptions in his kinetic theory of gases, which led to wrong results. According to van der Waals’, it is not advisable to assume the following:

(a) The volume occupied by the gaseous molecules is negligible as compared with the total volume of the gas at all conditions. Thus, van der Waals pointed out the two corrections in the gas equation.

(b) The forces of attraction among gaseous molecules are negligible at all conditions.

Real pressure of a gas = Pressure developed due to collisions + Pressure loss due to attraction = P + P' (Since in gases, a uniform distribution of molecules occurs)

CRITICAL PHENOMENON AND LIQUEFACTION OF GASES

The mathematical definition of the critical point is given by the following equation:

Critical Temperature: It is defined as the temperature above which gases can never be liquefied; however, the pressure applied may be high.

Critical Pressure: The pressure just required to liquefy a gas at critical temperature is known as critical pressure.

Critical Volume: The volume of a gas at the critical temperature and critical pressure is known as critical volume.

As already mentioned, the temperature at which a real gas obeys Boyle’s law is called the Boyle temperature, TB. It is represented by the expression TB=a/bR.

Learn More About the Properties of Liquid States of Matter

Viscosity is defined as the internal resistance that one part of a ﬂuid offers to the ﬂow of another part of the ﬂuid. Similar to liquids, gases also show viscous behaviour. For gases, we generally assume planes at a distance of the mean free path.

F = ηA(du/dz) where, F is the force required to maintain the flow of layers, A is the area of contact, (du/dz) is velocity gradient (the change in velocity with distance) and η is coefficient of viscosity. SI unit of viscosity coefficient is N s m-2.

The coefficient of viscosity(η) is given by the expression

where k is the Boltzmann constant equal to R/N, η and m are the diameter and mass of the molecule, respectively. Reciprocal of η gives ﬂuidity. The variation of σ with pressure and temperature gives the nature of the intermolecular forces in the gas. The unit of viscosity is poise (dyne cm–2 s)in cgs and Pascal-second (Pas) or Newton second per square meter (Nsm–2) in SI units. The viscosity of gases, unlike for liquids, increases with an increasing temperature and is independent of pressure.

The movement of molecules from the liquid phase into the gas phase (i.e. evaporation) goes on continuously. If the surface over the liquid is covered, the molecules in the vapour phase return after the collision with the covered area and, thus, strike the liquid surface and stick there. Furthermore, as the number of the gas-phase molecules increases, the probability increases that a molecule in the gas phase will strike the liquid surface and stick there. This phenomenon is known as condensation. 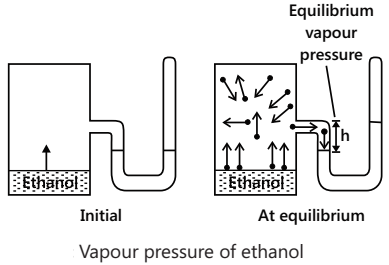 This article has basically tried to highlight the two states of matter (Gaseous and Liquid state) in the form of short revision notes of chapter 5 for class 11 students in order to understand the basic concepts of the chapter. The notes on states of matter have been prepared for both class 11 as well as for the different competitive exams such as IIT jee, neet, etc.