This article focuses on the sex determination of birds

Sex determination is the establishment of sex through differential development in an organism or offspring. It determines whether it will be male or female. Different species use very different strategies for this purpose. Some organisms like turtles rely entirely on environmental factors such as temperature for sex determination. Sex of human being and insects like grasshopper, Firefly, Drosophila etc. is determined genetically.

Chromosomal basis of sex-determination is of the following types:

Male heterogamety: In this type, a male individual produces two different types of gametes. Thus, the sex of the offspring is determined by the sperm. it involves two types of sex-determining mechanisms; XO type and XY type.

i. XO type (XX-XO type): It is observed in a large number of insects e.g. Grasshopper. The number of chromosomes is different in male and female individuals. It is clear that all eggs (ova) bear an additional X-chromosome besides the autosomes while only 50% of the sperms bear X-chromosomes. In grasshopper, eggs fertilized by (A+X) type sperm become females while those fertilized by (A+O) type sperm become males. Therefore, sperm determines the sex of the offspring. Due to the involvement of the X-chromosome in sex determination, it was designated to be the sex chromosome. 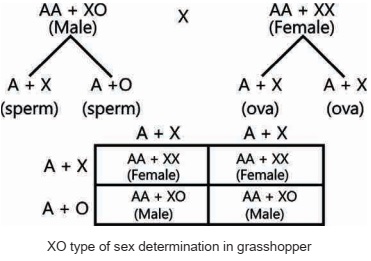 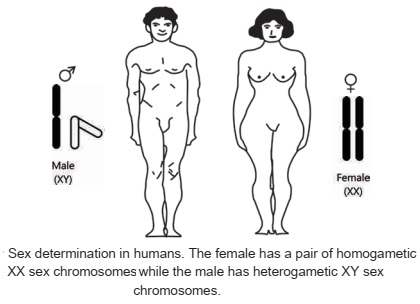 50% of the total sperm produced possess the X-chromosome and the rest 50% has Y-chromosome besides the autosome. There is an equal probability of fertilization of the ovum (22+X) with the sperm carrying either X or y chromosome. If ovum fertilizes with (22+ X) type sperm, the zygote develops into a female (44+ XX).

Thus, genetic makeup of the sperm determines the sex of the child. It is also clear that in each pregnancy there is always 50% or 1/2 probability of either a male or a female child. 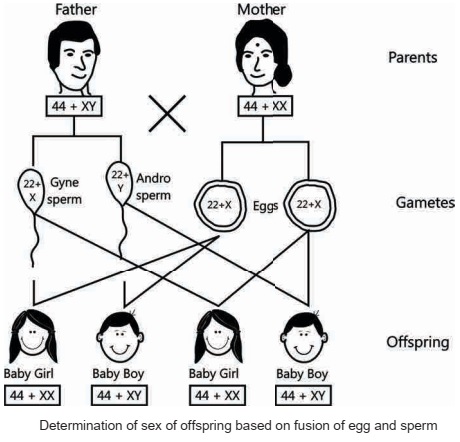 The sex chromosomes in birds are designated Z and W, and the male is the homomorphic sex (ZZ) while the female is heteromorphic (ZW). In most avian species, The Z chromosome is a large chromosome, usually the fourth or fifth largest, and contains almost all the known sex-linked genes. The W chromosome is generally a much smaller microchromosome, containing a high proportion of repeat sequence DNA. 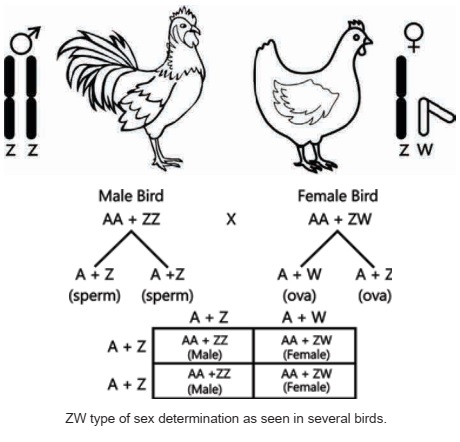 The number of sets of chromosomes an individual receives is the basis of the sex-determination in honey bee. An offspring formed of the union of a sperm and an egg develops as a female (queen or worker), and an unfertilized egg develops as a male (drone) by means of parthenogenesis. This means that the males have half the number of chromosomes than that of a female. The females are diploid having 32 chromosomes and males are haploid, i.e., having 16 chromosomes. This is called as haplodiploid sex-determination system and has special characteristic features such as the males produce sperms by mitosis shown in figure below, they do not have father and thus cannot have sons, but have a grandfather and can have grandsons.