Gregor Mendel conducted hybridisation experiments on garden peas for seven years (1856-1863) and proposed the so-called Mendel's Laws Of Inheritance in living organisms. Before going into the details of the Mendel's Laws of Inheritance, we must first understand the experiment performed by Mendel.

His experiments had an outsized sampling size, that gave greater credibility to the data that he collected. Mendel investigated characters in the garden pea plant that were manifested as two opposing traits, E.g. Tall or dwarf plant; yellow or green seeds. The seven contrasting characters that were studied by Mendel are:

Inheritance of One Gene

Mendel discovered that the “F1 generation” (first filial generation) was comprised entirely of individuals exhibiting only one of the traits. However, when this generation was interbred, its offspring, the “F2” (second filial generation), showed a 3:1 ratio i.e. 3 individuals had the same trait as one parent and 1 individual had the trait of the other parent. Mendel then theorized that genes can be made up of three possible pairings of heredity units, which he called ‘factors’: AA, Aa, and aa. The ‘A’ represents the dominant factor and the ‘a’ represents the recessive factor. In Mendel’s crosses, the starting plants were homozygous AA or aa, the F1 generation was Aa, and the F2 generation was AA, Aa, or aa. The interaction between these two determines the physical trait that is visible to us. 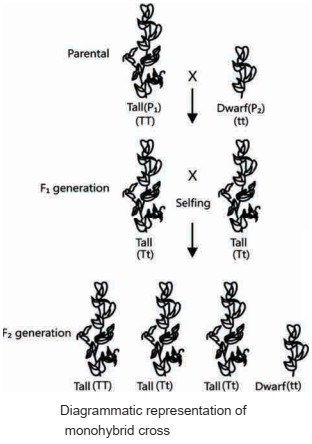 Similar results were obtained with the other traits that he studied: only one of the parental traits was expressed in the F1 generation while at the F2 stage both the traits were expressed in the proportion 3:1. The traits did not show any blending at either F1 or F2 stage.

A British geneticist, Reginald C. Punnett developed a square-like diagram called Punnet Square to understand the production of gametes by the parents, the formation of the zygotes, the F1 and F2 plants. It is a graphical representation to calculate the probability of all possible genotypes of offspring in a genetic cross. The ratio is

Mendel’s observations and conclusions are summarized in the following three principles, or laws called as Mendel's Laws Of Inheritance.

The Law of Segregation states that for any trait, each pair of alleles of a gene split and one gene passes from each parent to an offspring. 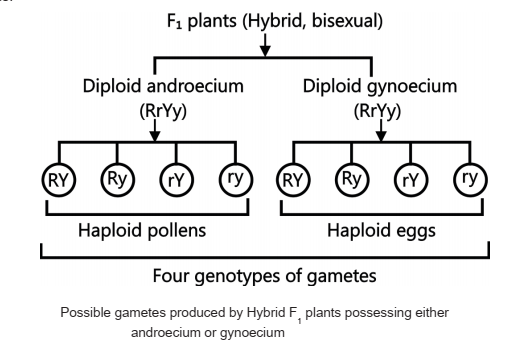 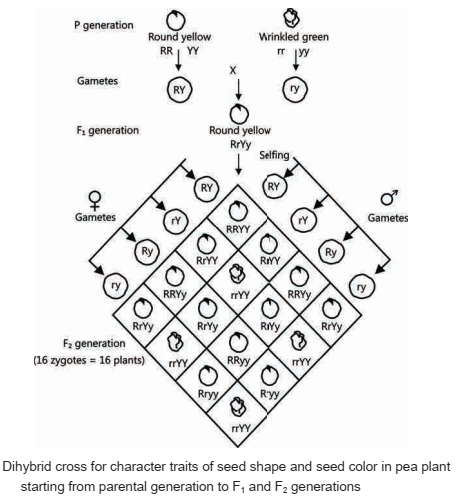 The Law of Independent Assortment states that completely different pairs of alleles are passed onto the offspring independently of each other. Therefore, the inheritance of genes at one location in a genome doesn't influence the inheritance of genes at another location. Mendel crossed pea plants differing in two characters (dihybrid cross) to verify the results of monohybrid crosses. This helped him to understand the inheritance of two pairs of factors at a time. A cross was made between a pure round yellow-seeded pea plant (RRYY) with wrinkled green-seeded pea plant (rryy). The yellow colour is dominant over green and rounded seed shape over wrinkled seed shape. 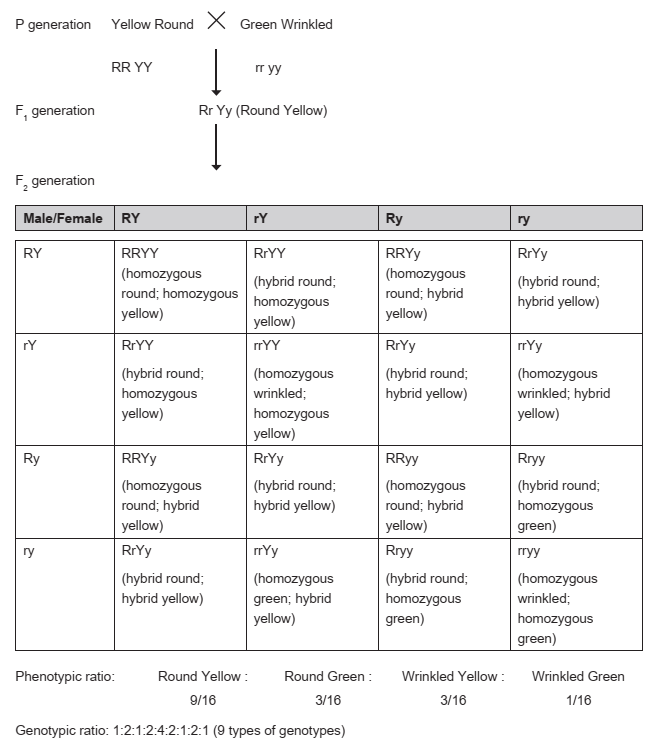