The S block elements is a chapter of chemistry in Class 11 of NCERT books. The chapter highlights the elements of the first two groups of the periodic table, which are collectively known as the s block elements.

What elements are in S block?

Collectively known as the alkali metals, because they form hydroxides on reaction with water, which are strongly alkaline in nature.

What are alkaline earth metals and why are they called so?

The elements of Group 2 include beryllium (Be), magnesium (Mg), calcium (Ca), strontium (Sr), barium (Ba) and radium (Ra). These elements with the exception of beryllium are commonly known as the alkaline earth metals. These are so-called because their oxides and hydroxides are alkaline in nature and these metal oxides are found in the earth’s crust.

TRENDS IN PHYSICAL AND CHEMICAL PROPERTIES

What is the electronic configuration of S block elements?

All alkali metals have one valence electron, ns1 outside the noble gas core. The loosely held s-electrons in the outermost valence shell of these elements make them the most electropositive metals. They readily lose electrons to give monovalent M+ ions. Hence, they are never found in the free state in nature.

Alkaline earth metals have two electrons in the s-orbital of valence shell. The compounds of these elements are also predominantly ionic. 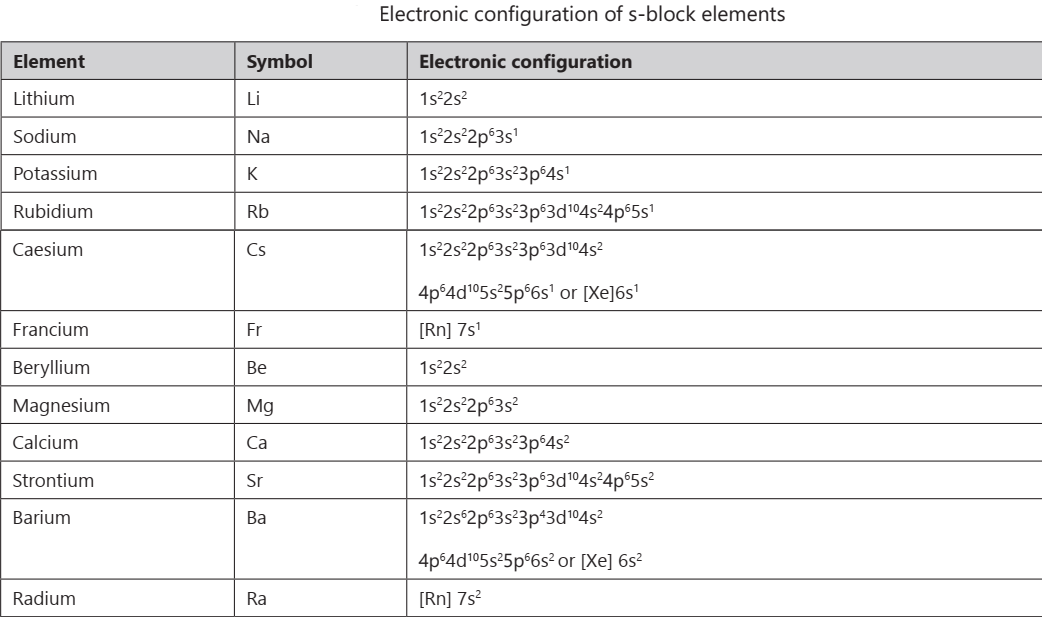 The ionization enthalpies of the alkali metals are considerably low and decrease down the group from Li to Cs. This is because the effect of increasing size outweighs the increasing nuclear charge and the outermost electron is very well screened from the nuclear charge.

All alkali metals are silvery-white, soft and light metals. This is due to having only one valence electron which participates in bonding. These elements have a low density which increases down the group from Li to Cs, because of their larger size. However, potassium is lighter than sodium because of its larger atomic volume.

The melting and boiling points of the alkali metals are low, which indicate weak metallic bonding, due to the presence of only a single valence electron in them. The strength of the metallic bond decreases down the group, and the m.p. decreases accordingly.

The m.p of lithium is nearly twice as high as that of sodium because of the stronger metallic bonding on account of its smaller size. However, the m.p. of all the others are close together.

The alkali metals and their salts impart a characteristic colour to oxidizing flames. This is because the heat from the flame excites the outermost orbital electron to a higher energy level.

Alkali metals exhibit very high chemical reactivity, and the reasons for their high reactivity are:

(b) Low heat of atomization

Reactivity towards Air and Water

Alkali metals tarnish in dry air due to the formation of their oxides which in turn react with moisture to form hydroxides. They burn vigorously in oxygen, forming oxides.

Lithium forms a monoxide, sodium forms a peroxide, and the other metals form a superoxide.

The superoxide O2- ion is stable only in the presence of larger cations such as K, Rb, Cs.

The alkali metals react with water to form hydroxides and dihydrogen. The reaction becomes increasingly violent on descending the group.

Other metals of the group react explosively with water.

They also react with proton donors such as alcohol, gaseous ammonia and alkynes. This is because of their high reactivity towards air and water, the alkali metals are normally kept in kerosene oil.

Beryllium and magnesium are inert to oxygen and water because of the formation of an oxide film on their surface.

The alkali metals react with dihydrogen at about 673 K (lithium at 1073 K) to form hydrides. All the metal hydrides are ionic solids with high melting points.

All alkaline earth metals except beryllium combine with hydrogen upon heating to form their hydrides, MH2, which are also high melting solids.

BeH2 however, can be prepared by the reaction of BeCl2 with LiAlH4 .

The alkali metals readily react vigorously with halogens to form ionic halides, MX. However, lithium halides are somewhat covalent. This is because of the high polarization capability of the lithium ion. The Li+ ion is very small in size and has a high tendency to distort electron clouds around the negative halide ion. Since anion with larger sizes can be easily distorted, among halides lithium iodide is the most covalent in nature.

All the alkaline earth metals combine with halogens at elevated temperatures forming their halides.

Alkali metals, are strong reducing agents, lithium being the most and sodium the least powerful with the small size of its ion, lithium has the highest hydration enthalpy which accounts for its high negative EΘ value and its high reducing power.

Like alkali metals, the alkaline earth metals are strong reducing agents. This is indicated by the large negative value of their reduction potentials.

Beryllium has a less negative value compared to other alkaline earth metals, due to a relatively large value of the atomization enthalpy of the metal.

However, its reducing nature is due to a large hydration energy associated with the small size of Be2+ ion.

In dilute solutions, the main species are metal ions (M+) and electrons, which are solvated (i.e. ammoniated). The blue colour, corresponding to a broad absorption band near 1500 nm that falls into the visible range, is attributed to the solvated electron.

The blue solution of alkali metals in liquid ammonia, decompose very slowly with the liberation of hydrogen (i.e., reduction of the solvent).

Where, ‘am’ denotes solution in ammonia.