The entire chapter of electrochemistry has been divided into two articles. The first article includes the Electrochemical cell, Electrolytic cell, Nernst equation, Conductance, Types of electrolytes and Kohlrausch Law. The second article is on Electrolysis, Batteries, Fuel Cells and Corrosion.

In a redox reaction, one substance loses electrons and another substance gains electrons. In this, the transfer of electrons is the reason for the electric current.

There are two types of cells

An electrochemical cell is a system or arrangement which consists of two metallic electrodes dipped in the same or different electrolytic solutions and joined by a salt bridge. In this cell, the chemical energy of the redox reaction is converted into electrical energy.

The two half-cell reactions are 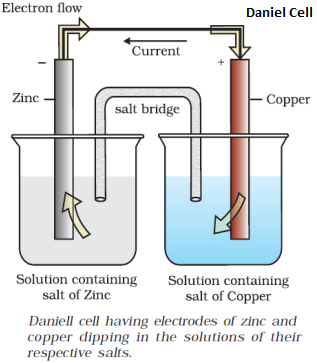 A cell is represented as

If an external opposite potential is applied in the cell and is increased slowly, the reaction continues to take place till the opposing voltage reaches the value 1.1 V when the reaction stops altogether and no current flows through the cell. Any further increase in the external potential starts the reaction again but in the opposite direction. It now functions as an electrolytic cell. In an electrolytic cell, oxidation occurs at the anode but it is a positive plate and reduction occurs at the cathode, which is a negative plate.

Note: Electrochemical or voltaic (galvanic) cells produce electricity as a result of chemical reactions, while in electrolytic cells, electricity is used to produce a non-spontaneous chemical change.

Electrode potential is dependent on the temperature and concentration of the ion involved.

The potential difference between the two half-cells is called the cell potential. It is given by the following formula,

It (emf) is the potential difference when no current is drawn from the system. It is measured in volts (V).

For standard hydrogen electrode, E°SHE = 0.00 V. SHE and calomel electrode are used as reference half-cells.

Half-cell or Standard Hydrogen Electrode (SHE) is Pt (s) I H2(g) 1 atm l H+ (aq). It is assigned to 0 potential at all temperatures.

The standard hydrogen electrode consists of a Pt electrode coated with platinum black which is dipped in an acidic solution and pure hydrogen gas is bubbled continuously through it. The concentration of hydrogen is maintained at unity both the reduced and oxidised forms. 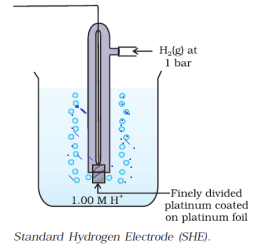 ■ Hydrogen ions cannot oxidise Cu (or hydrogen gas con reduce copper ion) as it has a positive value of standard electrode potential, that's the reason, Cu does not dissolve in HCl.

Nernst equation gives the relation between electrode potential and the concentration of metal ions.

Relationship between equilibrium constant and standard potential of the cell

Electrochemical Cell and Gibbs Energy of the Reaction:

The charge has to be passed reversibly in order to obtain maximum work from a galvanic cell. The reversible work done by a galvanic cell is equal to decrease in its Gibbs energy.

Thus, from the measurement of E°cell  we can obtain an important thermodynamic quantity, ∆rG°, standard Gibbs energy of the reaction. From the latter, we can calculate the equilibrium constant by the equation.

Before introducing the subject of the conductance of electricity through electrolytic solutions, we must know about the electrical resistance.

Every substance offers resistance to the flow of electricity to a small or large V extent. Resistance, R = V/I where V is voltage and I is current. SI unit of resistance is ohm (Ω). The electrical resistance R of any conductor is directly proportional to its length (l) and inversely proportional to its area of cross-section, (A), i.e., R α l/A or R= ρ l/A where ρ is called resistivity or specific resistance of the object.

It can be defined as the resistance offered by a substance of 1 m length with an area of cross-section equal to 1 m2. SI unit of ρ is ohm-metre (Ω-m).

The power of the electrolyte with which current flows easily through a conductor is known as its conductance. It is inverse of resistance, i.e., conductance, G = 1/R = A/ρl =κ A/l . SI unit of conductance is Siemens (S) or ohm-1.

The inverse of resistivity is called the conductivity (or specific conductance). Therefore, conductivity, κ = 1/ρ. SI unit of conductivity is S m-1 but quite often, it is expressed in S cm-1. It always decreases with the decrease in concentration for weak and strong electrolytes.

Note: Superconductors are said to have infinitive conductivity or zero resistivity.

(i) the structure of the metal

(ii) the no of valence electrons per atom

(iv) nature of the metal

(i) the nature of the electrolyte added

(iii) concentration of the electrolyte

(iv) size of the ions produced and their solvation

(v) the nature of the solvent and its viscosity

Measurement of the Conductivity of Ionic Solutions:

It is defined as the conducting power of the ions present in the solution produced by 1 mole of the electrolyte kept one centimetre apart.

It increases with the decrease in concentration (or increase in dilution). Its unit is S m2 mol-1 or S cm2 mol-1.

There are two types of electrolytes

The variation in Λm with concentration is different for strong and weak electrolytes and is shown in the figure below. 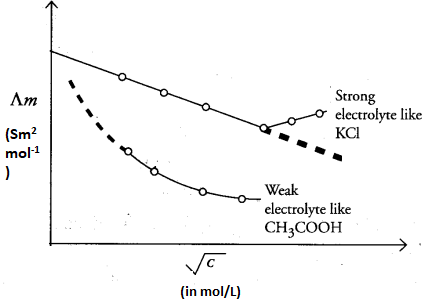