The entire chapter of electrochemistry has been divided into two articles. This article (Part 2) is on Electrolysis, Batteries, Fuel Cells and Corrosion. The first article (Part 1) includes the Electrochemical cell, Electrolytic cell, Nernst equation, Conductance, Types of electrolytes and Kohlrausch Law.

Many metals such as Na Mg, Al are produced by electrochemical reduction of their respective cations on a large scale where no suitable chemical reducing agents are available for this purpose.

The amount of chemical reaction which occurs at any electrode during electrolysis by a current is proportional to the quantity of electricity passed through the electrolyte, i.e., m = ZQ or ZIt, where, m is the mass of substance deposited, current 'I' is in ampere and t is the time in seconds.

where Z is the electrochemical equivalent of the substance deposited.

The amounts of different substances liberated by the same quantity of electricity passing through the electrolytic solution are proportional to their chemical equivalent weight w1/E1 = w2/E2 = w3/E3 ……. where w1 is the mass of substance 1 deposited and E1 is the equivalent weight and so on.

If we use molten NaCl, the products of electrolysis are sodium metal and Cl2 gas. Here, we have only one cation [Na+ ] which is reduced at the cathode (Na+ + e- ---> Na) and one anion (Cl-) which is oxidised at the anode (Cl-—>1/2  Cl2 + e-). During the electrolysis of aqueous sodium chloride solution, the products are NaOH, Cl2 and H2. In this case besides Na+ and Cl- ions, we also have H+ and OH- ions along with the solvent molecules, H2O.

At the cathode, there is competition between the following reduction reactions:

The reaction with higher value of E° is preferred and therefore, the reaction at the cathode during electrolysis is

Therefore, the net reaction at the cathode may be written as

At the anode, the following oxidation reactions are possible

The reaction at anode with lower value of E° is preferred and therefore, water should get oxidised in preference to Cl- (aq). However, on account of over potential of oxygen, oxidation of Cl- ions is preferred. Thus, the net reactions may be summarised as

There are two types of batteries

The cell in which products cannot be changed into reactants back is called a primary cell, e.g., Daniell cell, mercury cell.

It is also known as the primary voltaic cell and consists of a zinc container which acts as an anode and carbon (graphite) rod as a cathode surrounded by powdered manganese dioxide and carbon. A moist paste of NH4Cl and ZnCl2 is filled in between the electrodes space. 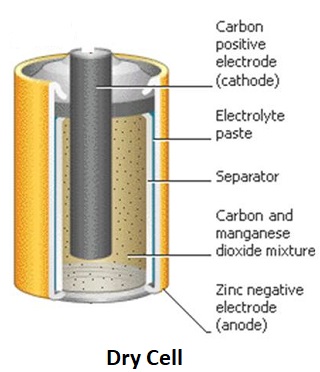 Ammonia produced in the reaction forms a complex with Zn2+ to give [Zn(NH3)4]2+. The cell has a potential of nearly 1.5 V.

It consists of Zn-Hg amalgam as an anode. The cathode is a paste of mercuric oxide (HgO) and carbon powder. The electrolyte is a paste of KOH and ZnO. 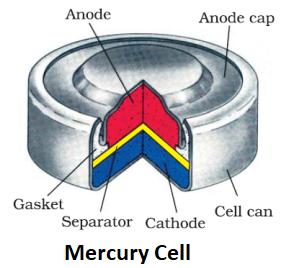 The electrodes reactions are given as

The cell potential is approximately 1.35 V and remains constant during its life because the overall reaction does not involve any ion in a solution whose concentration can change during its life-time.

A secondary cell is capable of being charged after discharge again and again, e.g., lead storage battery, nickel-cadmium battery.

It consists of a lead anode and a grid of lead packed with lead dioxide as the cathode. A solution of sulphuric acid acts as an electrolyte. 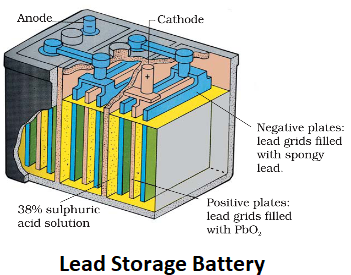 When the battery is in use (discharging), the cell reactions are

During charging, the reactions are reversed.

It consists of a cadmium anode and metal grid containing NiO2 as the cathode. A solution of KOH acts as an electrolyte. 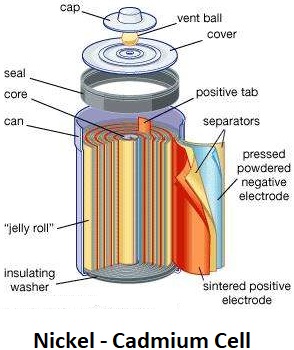 The overall cell reaction of Ni-Cd cell during discharging is

It has a longer life than the lead storage cell but more expensive to manufacture.

These are the galvanic cells that convert the energy of combustion of fuels directly into electrical energy. Energy can be obtained indefinitely from the fuel cell as long as outside supply of fuel is maintained.

In this fuel cell, H2 and O2 gases are bubbled through porous carbon electrodes into concentrated aqueous sodium hydroxide solution. Finely divided platinum or palladium acts as a catalyst. 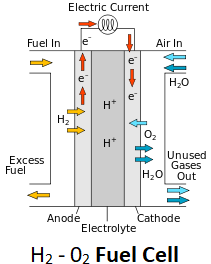 The electrode reactions of H2 - O2 fuel cell are

Fuel cells are pollution free, produce electricity with an efficiency of about 70%. It is also used as an primary source of electrical energy on the moon flights.

It is basically an electrochemical phenomenon in which a metal oxide or other salt of the metal forms a coating on the metal surface. The rusting of iron, tarnishing of silver surface, the surface of copper and bronze turning green are some of the examples of corrosion.

Rusting is an electrochemical phenomenon that occurs in the presence of water and air.

One of the simplest method of preventing corrosion is to prevent the metal surface to come in contact with the atmosphere. This can be done by barrier protection through coating of paints or electroplating. Another simple method is galvanization or coating of surface with tin metal. It can also be done by the use of anti-rust solutions.

The notes on electrochemistry (Part 1) for class 12 Chemistry have been given below.