Learn The Properties Of Lanthanides In Detailed Explanation

The 14 elements (Ce to Lu) are called the lanthanoids, or lanthanides. These elements are characterized by the filling up of the antepenultimate 4f energy levels. They are extremely similar to each other in properties, and until 1907 they were thought to be a single element. In the past, they were called rare earths. This name is not appropriate because many of the elements are not particularly rare. Furthermore, the name is not precise since in addition to the 14 lanthanides it has been used to include La, or Sc, Y and La which are d-block elements, and sometimes Th (an actinide) and Zr (another d-block element). Here we will learn the most prominent Properties of Lanthanides - Electronic Structure, Oxidation State, Solubility, Colour and Spectra, and last but not least the Magnetic Properties.

The electronic structures of the lanthanide metals are shown in Table. Lanthanum (the d-block element preceding this series) has the electronic structure: xenon core 5d1 6s2. It might be expected that the 14 elements from cerium to lutetium would be formed by adding 1, 2, 3,.. .14 electrons into the 4f level. However, it is energetically favourable to move the single 5d electron into the 4f level in most of the elements, but not in the cases of Ce, Gd and Lu. The reason why Gd has a 5d1 arrangement is that this leaves a half-filled 4f level, which gives increased stability.

Lu has a 5d1 arrangement because the f shell is already full. The lanthanides are characterized by the uniform (+III) oxidation state shown by all the metals. They typically form compounds which are ionic and trivalent. The electronic structures of the ions are Ce3+ f1, Pr3+ f2, Nd3+ f3, . . Lu3+ f14.

The 4f electrons in the antepenultimate shell are very effectively shielded from their chemical environment outside the atom by the 5s and 5p electrons. Consequently, the 4f electrons do not take part in bonding. They are neither removed to produce ions nor do they take any significant part in crystal field stabilization of complexes. Crystal field stabilization is very important with the d-block elements. The octahedral splitting of f orbitals Δo is only about 1 kJ mol-1. Whether the f orbitals are filled or empty has little effect on the normal chemical properties. However, it does affect their spectra and magnetic properties. 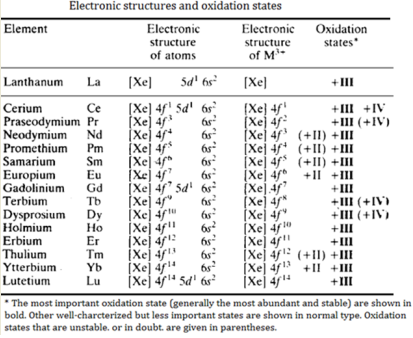 The lanthanide elements resemble each other much more closely than do a horizontal row of the transition elements. This is because the lanthanides effectively have only one stable oxidation state, (+III). Thus in this series, it is possible to compare the effects of small changes in size and nuclear charge on the chemistry of these elements.

Salts of the lanthanides usually contain water of crystallization. Solubility depends on the small difference between the lattice energy and the solvation energy, and there is no obvious trend in the group. The solubility of many of the salts follows the pattern of Group 2 elements. Thus the chlorides and nitrates are soluble in water and the oxalates, carbonates and fluorides are almost insoluble. Unlike Group 2, however, the sulphates are soluble. Many of the lanthanides form double salts with the corresponding Group 1 or ammonium salts, e.g. Na2SO4Ln2(SO4)3. 8H2O and as these double salts crystallize well, they have been used to separate the lanthanides from one another.

COLOUR AND SPECTRA: The Magnificent Properties of Lanthanides

Many trivalent lanthanide ions are strikingly coloured both in the sold state and in aqueous solution. The colour seems to depend on the number of unpaired f electrons. Elements with (n) f electrons often have a similar colour to those with (14 - n) f electrons. However, the elements in other valency states do not all have colours similar to their isoelectronic 3+ counterparts.

Colour arises because of the light of a particular wavelength visible region. The wavelength absorbed corresponds to the energy required to promote an electron to a higher energy level. In the lanthanides, spin-orbit coupling is more important than crystal field splitting. In the spectra of transition metals, crystal fields splitting is of major importance. All but one of the lanthanide ions show absorptions in the visible or near-UV regions of the spectrum.

The exception is Lu3+ which has a full f shell. These colours arise from f-f transitions. Strictly these transitions are Laporte forbidden (since the change in the subsidiary quantum number is zero). Thus the colours are pale because they depend on the relaxation of the rule. The f orbitals are deep inside the atom. Thus they are largely shielded from environmental factors such as the nature and number of ligands which form the complexes, and from the vibration of the ligands. Thus the position of the absorption band (i.e. the colour) does not change with different ligands. The vibration of the ligands changes the external fields. However, this only splits the various spectroscopic states by about 100 cm-1, so the absorption bands are unusually sharp. The lanthanides are used for wavelength calibration of instruments because of their sharp absorption bands.

The magnetic moment of transition elements is calculated from the equation.

(S + L) is the magnetic moment in Bohr magnetons. It is calculated using both the spin and orbital momentum contributions. S is the resultant spin quantum number and L is the resultant orbital momentum quantum number. For the first-row transition elements, the orbital contribution is usually quenched out by interaction with the electric fields of the ligands in its environment. Thus as a first approximation, the magnetic moment can be calculated using the simple spin only formula.

Magnetic Properties Of Other Lanthanides

The other lanthanide ions do not obey this simple relationship. The 4f electrons are well shielded from external fields by the overlying 5s and 5p electrons. Thus the magnetic effect of the motion of the electron in its orbital is not quenched out. Thus the magnetic moments must be calculated taking into account both the magnetic moment from the unpaired electron spins and that from the orbital motion. This also happens with the second and third-row transition elements.

The magnetic moment µ is calculated in Bohr magnetons (BM) by: 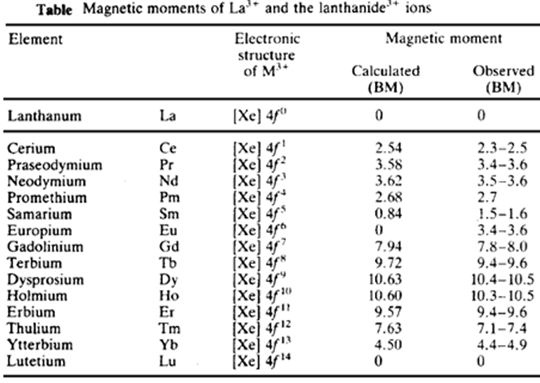