Synthesis and Properties of Borazine

The most important ring system of organic chemistry is the benzene ring, either as a separate entity or in polynuclear hydrocarbons such as naphthalene, anthracene, and phenanthrene. Inorganic chemistry has two (at least) analogues of benzene: borazine, B3N3R6, and trimeric cyclophosphazene compounds, P3N3X6.

Borazine has been known since the pioneering work of Alfred Stock early in this century. Stock's work was important in two regards: He was the first to study compounds such as the boranes, silanes, and other similar nonmetal compounds, and he perfected vacuum line techniques for the handling of air- and moisture-sensitive compounds, invaluable to the modern inorganic chemist.

Methods of Synthesis of Borazine

Stock synthesized it by heating the adduct of diborane and ammonia:

N- or B- substituted borazines may be made by appropriate substitution on the starting materials prior to the synthesis of the ring:

Or substitution after the ring has formed:

Physical and Chemical Properties of Borazine 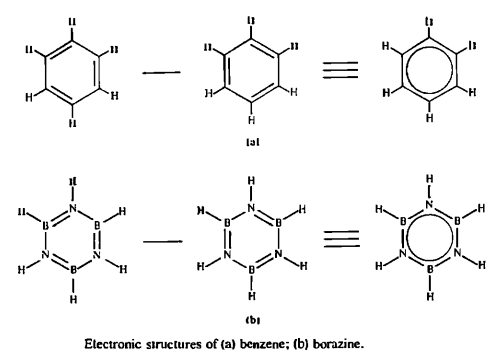 This is a misnomer because the chemical properties of borazine and benzene are quite different. Both compounds have aromatic π clouds of electron density with potential for delocalization over all of the ring atoms. Due to the difference in electronegativity between boron and nitrogen, the cloud in borazine is "lumpy" because more electron density is localized on the nitrogen atoms. This partial localization weakens the π-bonding in the ring.

Each nitrogen receives more σ-electron density from neighbouring boron than it gives away as a π-donor. The net effect is that the charge density on nitrogen increases. In addition, nitrogen retains its basicity and boron its acidity. Polar species such as HCI can, therefore, attack the double bond between nitrogen and boron. Thus, in contrast to benzene, B3N3H6 readily undergoes addition reactions: 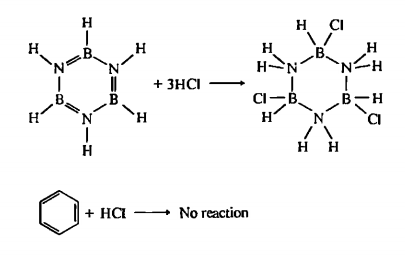 Borazine analogues of naphthalene and related hydrocarbons have been made by pyrolyzing B3N3H6 or by passing it through a silent discharge. Related four-membered rings. R2B2M2R’2, and eight-membered rings, R4B4M4R’4, are also known, but considerably less work has been done on them than on B3N3H6.

Benzene may be hydrogenated to produce the saturated compound cyclohexane. Hydrogenation of borazine results in polymeric materials of indefinite compositions. Substituted derivatives of the saturated cycloborazane, B3N3H12, form readily by addition to B3N3H6, but special techniques are necessary to prepare the parent compound. It was first synthesized by the reduction of the chloro derivative:

as resulted from their possible application as precursors to boron nitride ceramics. For example, the inorganic analogue of styrene, (H2C=CH)B3N3H5, has been polymerized and decomposed to produce BN.

Borazines have the correct B-to-N ratio for the production of this ceramic and its polymeric precursor may be used to deposit a uniform surface coating.