What is hydrogenation of alkenes?

Key points: Wilkinson’s catalyst, [RhCl(PPh3)3], and related complexes are used for the hydrogenation of a wide variety of alkenes at pressures of hydrogen close to 1 atm or less; suitable chiral ligands can lead to enantioselective hydrogenations.

The addition of hydrogen to an alkene to form an alkane is favoured thermodynamically (ΔrGθ = -101 kJ mol-1 for the conversion of ethene to ethane), it does take place at room temperature and pressure. However, the reaction rate is negligible at ordinary conditions in the absence of a catalyst, but in the presence of metallic nickel, copper, palladium or platinum, the reaction is fast and complete. The metal may be deposited on the inert solid support such as alumina or calcium carbonate.

Efficient homogeneous and heterogeneous catalysts are known for the hydrogenation of alkenes and are used in such diverse areas as the manufacture of nondairy spreads, pharmaceuticals, and petrochemicals.

What catalyst is used in the hydrogenation of alkenes?

One of the most studied catalytic systems is the Rh(I) complex [RhCl(PPh3)3], which is often referred to as Wilkinson’s catalyst. It is a square planar 16-electron d8 complex Chlorotris(triphenylphosphine)rhodium(I).

They can become five-coordinate through the simple addition of a ligand or six-coordinate through addition combined with oxidation. In either case, they become isoelectronic with the next noble gas, i.e., they achieve an 18-electron valence shell configuration.

This useful catalyst leads to the hydrogenation of a wide variety of alkenes and alkynes at pressures of hydrogen close to 1 atm or less at room temperature.

How do you convert alkanes to alkenes?

The dominant cycle for the hydrogenation of terminal alkenes by Wilkinson’s catalyst is shown in Fig. 25.5. 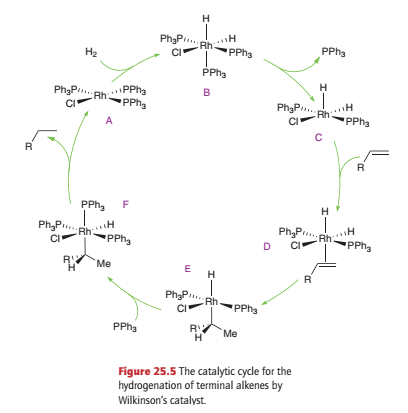 It involves the oxidative addition of H2 to the 16-electron complex RhCl(PPh3)3, to form the 18-electron dihydrido complex (B). The dissociation of a phosphine ligand from (B) results in the formation of the coordinatively unsaturated complex (C), which then forms the alkene complex (D).

Hydrogen transfer from the Rh atom in (D) to the coordinated alkene yields a transient 16-electron alkyl complex (E). This complex takes on a phosphine ligand to produce (F), and hydrogen migration to carbon results in the reductive elimination of the alkane and the reformation of (A), which is set to repeat the cycle.

A parallel but slower cycle (which is not shown) is known in which the order of H2 and alkene addition is reversed. Another cycle is known, based around the 14-electron intermediate [RhCl(PPh3)2].

Even though there is very little of this species present, it reacts much faster with hydrogen than [RhCl(PPh3)3] does, and makes a significant contribution to the catalytic cycle. In this cycle, (E) would eliminate alkane directly, regenerating [RhCl(PPh3)2], which rapidly adds H2 to give (C).

Wilkinson’s catalyst is highly sensitive to the nature of the phosphine ligand and the alkene substrate. Ethylene is commonly chosen to illustrate homogeneous hydrogenation with Wilkinson's catalyst, but the process is actually very slow with this alkene.

The explanation lies with the formation of a stable rhodium ethylene complex, which does not readily undergo reaction with H2. Ethylene competes effectively with the solvent for the vacant coordination site created when triphenylphosphine dissociates from Wilkinson's catalyst and thus serves as an inhibitor to hydrogenation.

Analogous complexes with alkylphosphine ligands are inactive, presumably because they are more strongly bound to the metal atom and do not readily dissociate.

Similarly, the alkene must be just the right size: highly hindered alkenes or the sterically unencumbered ethene are not hydrogenated by the catalyst, presumably because the sterically crowded alkenes do not coordinate and ethene forms a strong complex that does not react further.

These observations emphasize the point made earlier that a catalytic cycle is usually a delicately poised sequence of reactions, and anything that upsets its flow may block catalysis or alter the mechanism.

Wilkinson’s catalyst is used in laboratory-scale organic synthesis and in the production of fine chemicals. Related Rh(I) phosphine catalysts that contain a chiral phosphine ligand have been developed to synthesize optically active products in enantioselective reactions (reactions that produce a particular chiral product).

The alkene to be hydrogenated must be prochiral, which means that it must have a structure that leads to R or S chirality when complexed to the metal. The resulting complex will have two diastereomeric forms, depending on which face of the alkene coordinates to the metal atom.

In general, diastereomers have different stabilities and labilities, and in favourable cases, one or the other of these effects leads to product enantioselectivity.

An interesting detail of the process is that the minor diastereomer in solution leads to the major product. The explanation of the greater turnover frequency of the minor isomer lies in the difference in activation Gibbs energies.

Spurred on by clever ligand design and using a variety of metals, this field has grown rapidly and provides many clinically useful compounds; of particular note are systems derived from ruthenium(II) BINAP (8).