In this unit, we will be discussing the various properties of actinides. Most of the actinide elements are radioactive and the study of their chemistry in the laboratory is difficult. Moreover, the ability of actinoids to exist in different oxidation states has made their chemistry more complex. The earlier members of the series have relatively long half-lives. The latter ones have half-lives ranging from a day to 3 minutes ( for lawrencium Z= 103). The later members have, therefore, been prepared only in nanogram quantities.

All the actinide series elements have common 7s2 configuration and variable occupancy of 5f and 6d subshells. The 14 electrons are being added into 5f except in thorium (Z = 90) but filling a 5f continues again after thorium till 5f orbitals are complete at Z = 103 (Lawrencium).

The irregularities in the electronic configuration of actinides like those in the lanthanoids are related to the stabilities of f0, f7 and f14 configurations. For example, the configurations of Am and Cm are [Rn] 5f7 6d0 7s2 and [Rn] 5f7 6d1 7s2 respectively. 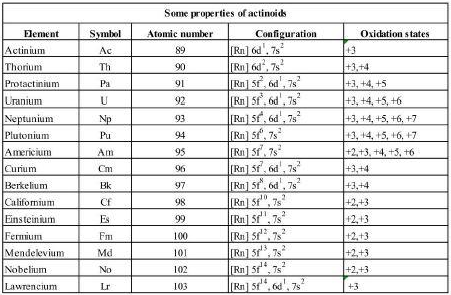 Berkelium (Bk, Z = 97) also shows an exceptional configuration of [Rn] 5f9 6d0 7s2. It is neither half-filled nor completely filled. Though 4f and 5f orbitals have similar shapes but 5f is less deeply buried than 4f. Hence, 5f electrons can participate in bonding to a far greater extent.

Since now some isotopes of many of the actinides are available in good amounts, their chemistry has been studied by tracer techniques.

The actinoids resemble lanthanoids in having more compounds in +3 than in the +4 state. However, the compounds in the +3 and +4 state tend to undergo hydrolysis.

Further, it may be noted that in the case of actinoids, the distribution of oxidation states is so uneven. It is of no use to discuss their chemistry in terms of their oxidation states.

The actinoids show actinoid contraction (very much like lanthanoid contraction) due to the poor shielding effect of the 5f-electrons. As a result, the radii of the atoms or ions of these metals decrease regularly across the series.

The contraction is greater from element to element in this series due to poorer shielding by 5f electrons. This is because 5f orbitals extend in space beyond 6s and 6p orbitals while 4f orbitals are buried deep inside the atom. 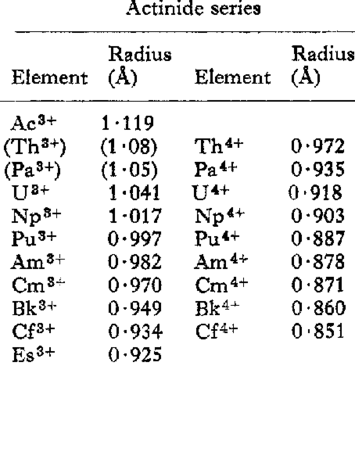 The variation in magnetic susceptibility of actinoids with the increasing number of unpaired electrons is similar to that of lanthanoids but the values are higher for the actinoids than for the lanthanoids.

Some of the physical properties of actinides are listed below briefly.

Like lanthanoids, actinoids are metals with a silvery appearance.

As they have much greater irregularities in their metallic radii than lanthanoids, they show great structural variability.

These metals are silvery white. However, actinoid cations are generally coloured. The colour of the cation depends upon the number of 5f -electrons. The cations containing no 5f-electron or having seven 5f-electrons (i.e., exactly half-filled f-subshell) are colourless. The cations containing 2 to 6 electrons in the 5f –subshell are coloured both in the crystalline state as well as in an aqueous solution. The colour  arises due to f-f transition, e.g., Ac3+ (5f0) = colourless,  U3+ (5f3) = Red, Pu3+ (5f5) = Violet and so on.

The actinides like the lanthanides have high melting and boiling points. However, they do not show any regular trend with rising in atomic number.

All the actinoids except thorium and americium have high densities.

The actinoids have lower ionization enthalpies than lanthanoids. The 5f is less penetrating than 4f and hence it effectively shields the nuclear charge.

All the known actinoid metals are highly electropositive. They resemble the elements of lanthanoid series in this respect.

All the actinoids are strong reducing agents.

All the actinoid elements are radioactive. First few members have relatively long half-lives. However, the remaining members have half-lives ranging from a few days to a few minutes (e.g., 3 min for Lr).