Each carbon is sp2 hybridized and trigonal planar, with bond angles of approximately 120°.

1: Identify and name the longest carbon chain which contains the double bond(s).

2: Number the longest chain so that the C-atom joined by the double bond have the lowest numbers possible. If the double bond has the same position starting from either end, use the positions of the substituents to determine the beginning of the chain.

If there is more than one double bond:

Ease of dehydration of alcohols: 3° > 2° > 1°, because the alkenes formed are more stable.

Various dehydrating agents can be used for the dehydration of alcohols:

The catalytic hydrogenation of alkynes to alkenes occurs faster than that of alkenes to alkanes. Therefore, by using a specific catalyst, it is possible to stop the reduction to give cis-or trans-alkenes depending upon the nature of the catalyst used.

(i) Cis-alkenes are formed by hydrogenation in presence of (i) Pd/BaSO4 or CaCO3 poisoned with PbCO3 or Lindlar’s catalyst(quinolone) (ii) B2H6 in THF/ ether+ CH3COOH.

(ii) Trans-alkenes are formed by hydrogenation in presence of Na+liq.NH3 (Birch reduction)

Alkyl halides on heating with a strong base such as sodium ethoxide or concentrated alcoholic solution of potassium hydroxide undergo dehydrohalogenation to give alkenes. 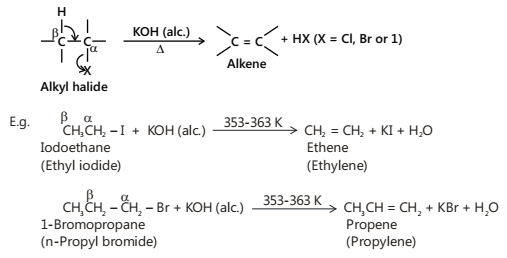 This process of the removal of a molecule of a halogen halide (HCl, HBr or HI) from a haloalkane to form an alkene is called dehydrohalogenation. Dehydrohalogenation is an example of an elimination reaction. Since, in this reaction, hydrogen is removed from β-carbon and halogen from the α-carbon, therefore, it is called β-elimination reaction. The ease of dehydrohalogenation of alkyl halides having the same alkyl group but different halogens is iodides > bromides > chlorides while for isomeric alkyl halides having the same halogen but different structures are: tertiary > secondary > primary. Thus, a tertiary alkyl iodide is most reactive.

Depending upon the structure, alkyl halides may give one or more isomeric alkenes. For example, dehydrohalogenation of 1-chlorobutane gives only one alkene, i.e., but-1-ene since only one type of β-hydrogen is available on the left side of the molecule.

When a bulky base is used, e.g. potassium tert-butoxide in tert-butyl alcohol or Et3N: for the dehydrohalogenation of RX, the less-substituted alkene (Hofmann product) is favoured.

It is due to the steric hindrance of the bulky base. The large tert-butoxide ion finds difficulty in removing one of the internal 2° H atoms because of the greater steric hindrance (or crowding) at that site in the transition state (T.S.). It removes one of the more exposed 1°H atoms of the methyl group and gives less-substituted alkene, i.e. follows Hofmann’s rule. 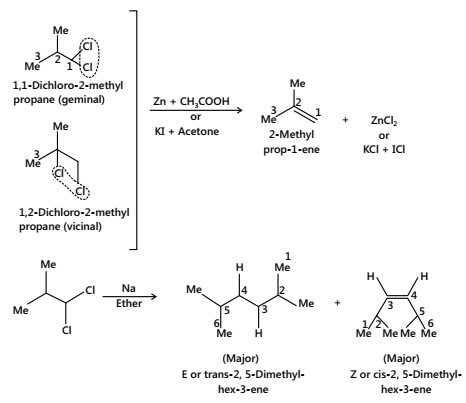 Note: The presence of tert-butyl group on equatorial position does not allow the ﬂipping of the equatorial Br to axial Br.

A forms alkene B does not.

Hydrogenation of alkenes can be carried out by the following reagents:

Halogens such as chlorine and bromine readily add to alkenes to form 1, 2-dihaloalkanes. For example, 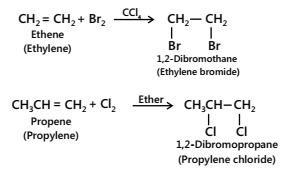 During the addition of bromine to alkenes, bromine loses its orange-red colour, since the dibromide formed is colourless. This reaction is, therefore, used as a test for unsaturation in organic compounds. Reactivity order: F2 > Cl2 > Br2 > I2 (because the Eactivation order is: F2 < Cl2 < Br2 < I2).

The actual product formed, however, depends upon whether the alkene is symmetrical or unsymmetrical as discussed below:

(i) Addition to symmetrical alkenes. When the alkene is symmetrical only one product is theoretically possible. For example, 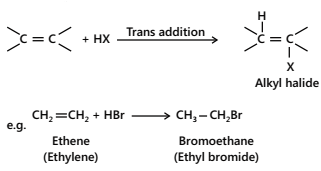 (ii) Addition to unsymmetrical alkenes: When the alkene is unsymmetrical, two products are theoretically possible. For example, the addition of HBr to propene in the dark and in the absence of peroxides can, in principle, give two products. But experimentally, it has been found that under these conditions, the major product is 2-bromopropane and the minor product is 1-bromopropane.

The rule states that: “The addition of unsymmetrical reagents such as HX, H2O, HOX, etc. to unsymmetrical alkenes occurs in such a way that the negative part of the addendum (i.e., adding molecule) goes to that carbon atom of the double bond which carries lesser number of hydrogen atoms.”

Theoretical explanation of Markovnikov’s rule: The addition of hydrogen halides to alkenes is an electrophilic addition reaction. Thus, during the addition of HBr to propene, the first step involves the addition of a proton. This addition, in principle, can occur in two ways. If the proton adds on the terminal carbon atom of the double bond, a 2° carbocation (I) is formed and if addition occurs on the middle carbon atom. a 1° carbocation (II) is produced.

It should be noted that Markovnikov’s rule is not always followed. In the presence of peroxides such as benzoyl peroxide ( C6H5CO – O – O – COC6H5), the addition of HBr (but not of HCl or HI) to unsymmetrical alkenes takes place contrary to Markovnikov’s rule. This is known as the Peroxide effect or the Kharasch effect. Thus

Mechanism: The addition of HBr to alkenes in presence of peroxides occurs by a free radical mechanism. It consists of the following three steps. 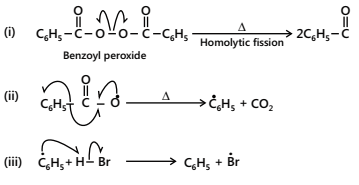 (b) Propagation: It consists of two steps.

During the first step, a Br¯ adds to the double bond in such a way so as to give the more stable free radical. In the second step, the free radical thus produced abstracts a H from HBr to complete the addition.

Thus, alkenes can be converted into alcohols as follows:

This overall two-step conversion of an alkene first into alkyl hydrogen sulphate followed by hydrolysis with boiling water to form alcohols is called the indirect hydration of alcohols.

Hydration means the addition of water. Ordinarily, water does not add directly to most of alkenes. However, some reactive alkenes do add water in the presence of mineral acids to form alcohols. The addition occurs in accordance with Markovnikov’s rule. For example

i. Complete oxidation with oxygen or air – Combustion: All combustion reactions are highly exothermic in nature. For example, CH2=CH2 + 3O2 → 2CO2 + 2H2O

(a) Oxidation with oxygen: Alkenes react with O2 in the presence of silver as a catalyst to form epoxy alkanes or epoxides. For example,

When ozone is passed through a solution of an alkene in some inert solvent such as CH2Cl2, CHCl3 or CCl4 at a low temperature (196-200K), it oxidizes alkenes to ozonides. Ozonides are unstable and explosive compounds. Therefore, they are not usually isolated but are reduced, in situ, with Zn dust and water or H2/Pd to give aldehydes or ketones or a mixture of these (reductive cleavage) depending upon the structure of the alkene.

However, if the ozonide is decomposed only with water, the H2O2 produced during the reaction oxidizes the initially formed aldehydes to the corresponding acids (oxidative cleavage). This two-step conversion of an alkene into an ozonide followed by its reductive cleavage to yield carbonyl compounds is called ozonolysis.

Importance: Ozonolysis is a versatile method for locating the position of a double bond in an unknown alkene gives the same combination of aldehydes and or/ketones. Therefore, this method has been extensively used in the past for the structure elucidation of alkenes.

Alkynes are unsaturated hydrocarbons that contain (C≡C) bond. Their general formula is CnH2n-2. 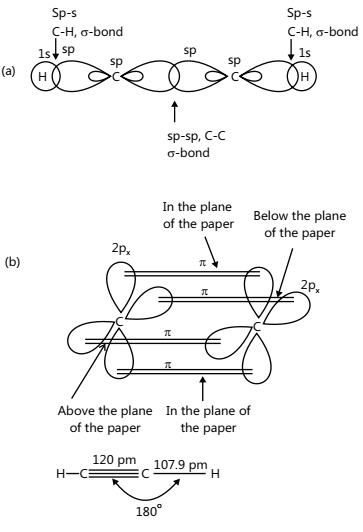 (i) Position isomerism. The first two members, i.e., ethyne and propyne exist in one form only. However, butyne and higher alkynes exhibit position isomerism due to the different position of the triple bond on the carbon chain.

Alkynes are prepared by the following general methods.

Calcium carbide needed for the purpose is manufactured by heating limestone (calcium carbonate) with coke in an electric furnace at 2275 K.

In ethylene dibromide, Br is present on a saturated carbon atom. Therefore, like alkyl halides, it is a reactive molecule. Consequently, on heating with alcoholic KOH, it readily eliminates a molecule of HBr to form vinyl bromide in good yield. The vinyl bromide is a highly unreactive molecule and hence on heating with alcoholic KOH, it does not easily lose a molecule of HBr to form acetylene and hence the yield of acetylene is low. Therefore, to obtain acetylene in fairly good yield from vinyl bromide, a much stronger base than alcoholic KOH such as NaNH2 in liquid NH2 is usually used. Thus, the dehydrohalogenation of ethylene dibromide to acetylene is preferably carried out in the following two stages.

(i) Physical state: The first three members are gases, the next eight are liquids, and the rest are solids.

(iii) Densities: Densities of alkynes like those of alkenes and alkanes increase as the molecular size increases. However, they are all lighter than water, since densities lie in the range 0.69 – 0.77 g/cm2.

(iv) Solubility: Alkynes are slightly more soluble in H2O because they are somewhat more polar.

(v) Smell: All alkynes are odourless except acetylene which has a garlic smell due to the presence of the impurity, phosphine.

Ethyne and other terminal alkynes (Alkynes in which the triple bond is at the end of the carbon chain) or 1-alkynes react with strong bases such as sodium metal at 475 K or sodamide in liquid ammonia at 196 K to form sodium acetylides with the evolution of H2 gas.

During these reactions, the acetylenic hydrogen is removed as a proton to form stable carbanions (acetylide ions) Sodium acetylide is decomposed by water regenerating acetylene. This shows that water is a stronger acid than acetylene and thus displaces acetylene from sodium acetylide.

Like alkenes, 1 mol of alkynes adds 2 moles of halogens and proceeds via anti-addition of halogens, and orange or brown colour of Br2 is discharged (test for unsaturation).

This article has tried to highlight all the important parts of Hydrocarbons in the form of short notes for class 11 students in order to understand the basic concepts of the chapter. The notes on Hydrocarbons have not only been prepared for class 11 but also for the different competitive exams such as iit jee, neet, etc.