What is hydrogen bond with examples?

How is hydrogen bond formed?

Ammonia, water, and HF show abnormally high melting and boiling points due to the formation of a link between two electronegative atoms, one of which is a joined to it by a polar covalent bond and the other by electrostatic attraction. The electrostatic attraction comes into play due to uneven sharing of the pair of bonding electrons between hydrogen and highly electronegative atom. Thus, a partial positive charge develops on hydrogen which attracts the negative end of a group of the same or other molecules forming a relatively weak bond. This type of bond is called the hydrogen bond and is the most powerful kind of dipole-dipole attraction. Being electrostatic in nature, it is much weaker than a covalent bond. The hydrogen bonds are usually represented by dotted lines. 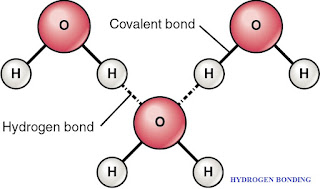 Due to hydrogen bonding, there is an increase in intermolecular aggregation forces which is reflected in the boiling point and solubility of the organic compound. There is an increase in the boiling point since energy is required to separate the hydrogen bonded molecule in the translation to the gaseous state. Compounds which form strong hydrogen bonds may be associated even with the gas phase. Thus Acetic Acid exists as a dimer in the gas phase.

What are the different types of hydrogen bonding?

There are two types of hydrogen bonds– intermolecular and intramolecular 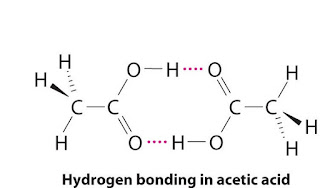 An intramolecular hydrogen bond is formed between two atoms of the same molecule. When the resulting ring is Five or Six-membered then the phenomena is called chelation and the five or six-membered ring is called the chelate ring. An example of chelation is for the enolic form of acetylacetone. Since on chelation intermolecular aggregation forces are not operative, chelated compounds have normal boiling points. Thus, Ortho nitrophenol is much more volatile than its para isomers since only the letter can form intermolecular hydrogen bonds. Some other examples of compounds exhibiting this type of hydrogen bonds are salicylaldehyde and Ortho-benzoic acid.

For forming intramolecular hydrogen bond the molecule must satisfy the following conditions:

The distinction can be made between inter and intramolecular hydrogen bonding on the basis of infrared spectroscopy and NMR spectroscopy.

Hydrogen bonding effects structure and molecular shape of molecules. The role of intramolecular hydrogen bonding is reflected in a large amount of enol present in some tautomeric equilibrium. The 6 membered heterocycles of oxygen closely resemble the chair conformation of cyclohexane. In the heterocyclic ring, the steric repulsion for axial substituents is reduced due to the replacement of a methylene group of cyclohexane by Oxygen or nitrogen. Since the divalent oxygen has no substituents, therefore, the 1,3-diaxial interactions which are the main unfavourable interaction for axial substituents in cyclohexanes are absent. Thus, the preferred conformation of 5-hydroxy-1,3-dioxane has the hydroxyl group in the axial position. This conformation is favoured due to hydrogen bonding of the hydroxyl group with the ring oxygen which is possible only with the axial hydroxyl group to serve as a stabilizing force for this conformation.

Effect of hydrogen bond on the physical property:

Hydrogen bonding shifts the position of bands in infrared and NMR spectra of organic compounds.

Books You Should Buy