Hydrocarbon – Molecule with only C – C and C – H bonds

Saturated Hydrocarbons or Alkanes or Paraffins

Nomenclature and Structure of Alkanes 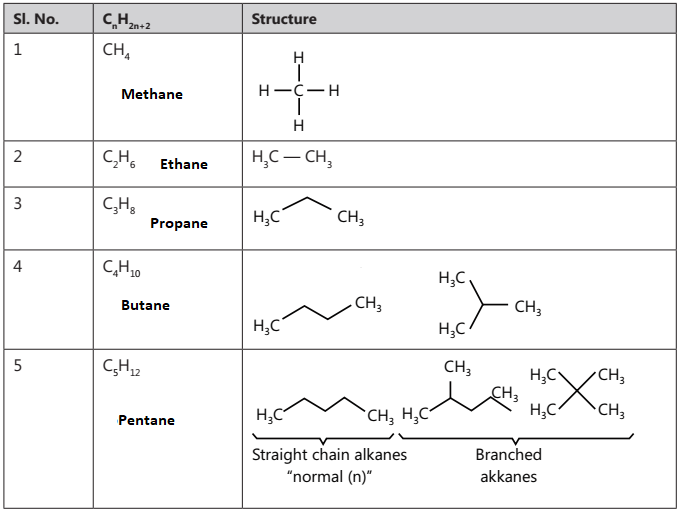 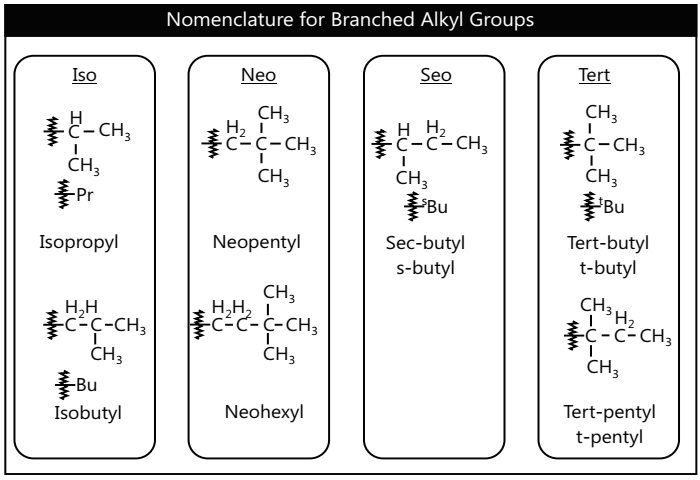 Isomers are structures with the same molecular formula but with a different atomic arrangement.

Constitutional isomers are isomers that differ in atom connectivity. 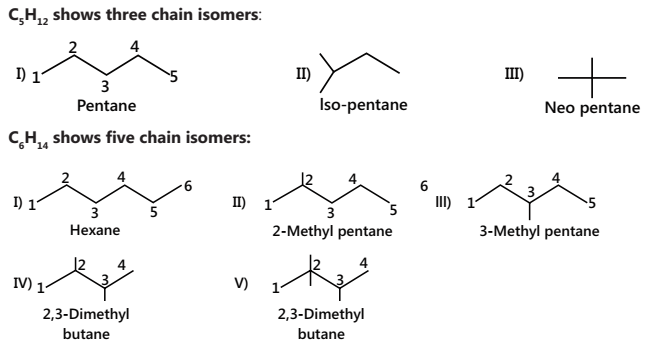 Hydrogenation or reduction is the process by which hydrogen is added to an unsaturated compound in the presence of a catalyst like Pt, Pd or Ni.

Alkenes and alkynes add one and two molecules of hydrogen, respectively, in the presence of a catalyst, such as finely divided nickel or palladium or platinum at 523–573 K to form alkanes. This reaction is commonly referred to as Sabatier and Sanderson's reduction.

Cycloalkane on hydrogenation gives alkane. The reactivity order of cycloalkanes is:

This is due to the angle strain. Greater the angle strain in the ring, less stable and more reactive is the compound. So, cyclopropane is the most reactive and gives propane on hydrogenation at a lower temperature, whereas higher cycloalkanes require high temperature.

(i) Reduction of Alkyl Halide

The reaction of an Alkyl halide with sodium in dry ether to give a hydrocarbon containing double the number of carbon atoms present in the halide.

NaOH alone could have been used in the above reaction but soda–lime is preferred because of the following two reasons:

(i) CaO permits the reaction to be carried out at a relatively higher temperature to ensure complete decarboxylation.

(ii) CaO keeps NaOH dry because it is quite hygroscopic (absorbs moisture from the air) in nature.

At cathode (reduction): Reduction of H2O takes place since its reduction potential is greater than Na.

In this reaction, hydrogen of an alkane is replaced by halogen. Reaction proceeds by “Homolytic fission” in which free radicals are formed.

(i) Chlorination: During chlorination of methane, all the four hydrogen atoms are replaced one by one to form a mixture of products. For example, 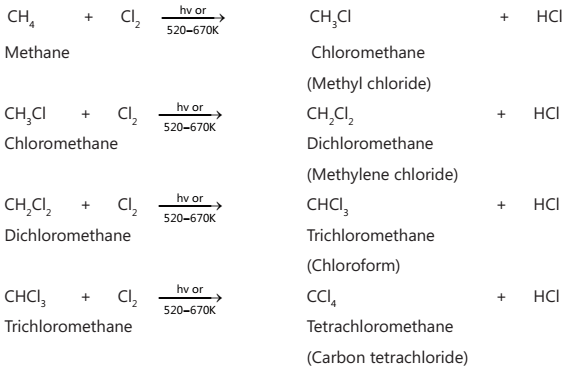 Let’s look at the mechanism behind the substitution reaction of bromine reacting with methane.

(a) Propagation: The methyl radical reacts with another bromine molecule. 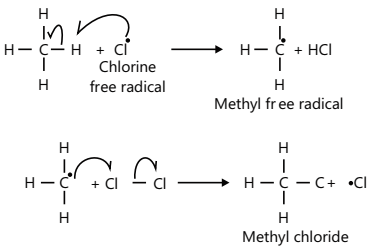 When a sufficient amount of methyl chloride has been formed, the •Cl produced in reaction (ii) has a greater chance of colliding with a molecule of CH3Cl rather than a molecule of CH4. If such a collision occurs, a new free radical (•CH2Cl) is produced (reaction (iii)) which may subsequently react with Cl2 producing a molecule of CH2Cl2 (reaction (iv)) and another ·Cl. This process continues till all the hydrogen atoms of methane are replaced by halogen atoms (reactions (v), (vi), (vii) and (viii)).

In presence of sufficient oxygen, alkane gives water and carbon dioxide as products. The complete combustion reaction of butane is:

In general, the formula for complete combustion of alkanes is:

In the insufficient supply of O2 by incomplete combustion, carbon monoxide and elemental carbon are formed.

(ii) CH4 and O2, when heated with molybdenum oxide, give methanal.

Because of the +I effect of the three CH3 groups, e– density at 3OC atom is relatively high, which accounts for its easier oxidation.

Alkanes on heating with AlCl3 at 570 K isomerize to give branched-chain alkane [takes place via Me shift]. 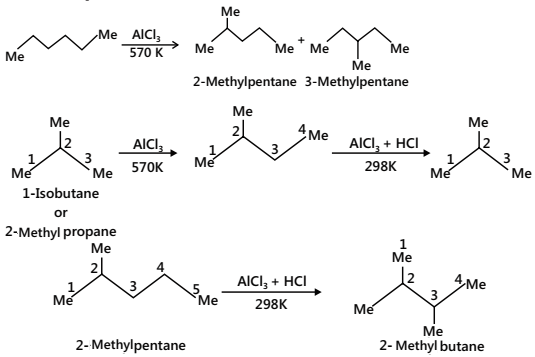 Alkanes containing six to eight carbon atoms when heated to about 773 K under 10–20 atm pressure in the presence of a catalyst consisting of oxides of chromium, vanadium and molybdenum supported over alumina, get converted into aromatic hydrocarbons. This process which involves cyclization, isomerization and dehydrogenation is called aromatization. For example

Under similar conditions, n-heptane gives toluene while n-octane gives a mixture of o–, m– and p–xylenes.

Pyrolysis of higher alkanes to give a mixture of lower alkanes, alkenes, etc. is called cracking. It is usually carried out by heating higher alkanes to high temperatures (773–973 K) under a pressure of 6–7 atmospheres in the presence or absence of a catalyst. For example

Pyrolysis of alkanes involves the breaking of C – C and C – H bonds and occurs by a free radical mechanism. The preparation of oil gas from kerosene oil and petrol gas from petrol is based upon the process of pyrolysis. For example, dodecane, a constituent of kerosene oil, on heating to 973 K in the presence of Pt, Pd or Ni, gives a mixture of heptane and pentene along with other products.

The infinite number of spatial arrangments that a molecule can adopt in space due to rotation about σ bonds are called rotational or conformational isomers. Analysis of energy changes during these rotations is called conformational analysis.

Check Part 2 of the Chapter Here: PART 2 - ALKENES AND ALKYNES

This article has tried to highlight all the important parts of Hydrocarbons in the form of short notes for class 11 students in order to understand the basic concepts of the chapter. The notes on Hydrocarbons have not only been prepared for class 11 but also for the different competitive exams such as IIT jee, neet, etc.