The 2nd mode of elimination involves two groups departing from the same atom. 1,1- or α-elimination are used for generating the reactive intermediate called carbenes. β- elimination reaction occurs through 3 mechanistic pathway out of which E1 and E2 are the most common. These processes are closely related to the SN2 and SN1 mechanism of substitution. The 3rd mechanism is designated as E1cB(elimination, Unimolecular of the conjugate base) which involves a carbanion intermediate and the substrate must contain substituents which stabilize it. The substrate undergoing E1cB elimination has a leaving group which is β placed to the carbanion stabilizing group. A good example is of Knoevenagel reaction. If a substrate undergoing elimination as a poor leaving group, the transition state of otherwise E2 elimination gains E1cB character. 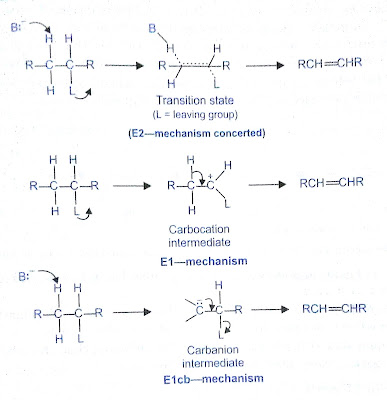 The structure of the organic compound undergoing elimination and the strength of the base used for the E2 elimination reflex on the extent of these three Bond changes at the transition state. This structure gains individual importance which is based on several factors.

Structure (iii) would gain importance when L– is the for leaving group or if the negatively charged carbanion is adjacent to the group when -I effect.

Structure (iv) gains importance when on the other hand L– is a good leaving group while B: base is a weak base.

Structure (ii), i.e., the alkene-like character of the transition state becomes significant when L– is a good leaving group and B: is a strong base.

The transition state (iii) will have considerable carbanion character when the leaving group is poor, example NMe3 in Hoffman elimination.

It is known that the C-D bond is stronger than the C-H bond and thus requires more energy to be broken. The rate of elimination in one should be much faster than 1a which has indeed been found to be the case.

The direction of elimination in E2 reaction:

The relative reactivity of alkyl halide in an E2 mechanism follows the order:

This is due to the predominant-formation of a more substituted alkene. 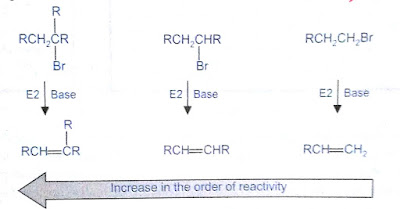 An exception to the saytzeff rule is observed from base-induced elimination from quaternary ammonium salts and from sulphonium salts which gives predominantly the less substituted alkene (Hofmann rule).

It can be understood that this difference between the elimination from an alkyl Bromide (saytzeff rule) and from a quaternary ammonium ion (Hofmann rule) on the basis of the poor leaving group tendency of amine compared to Br–.

Thus in the E2 elimination of a quarterly ammonium ion, the C-H bond is almost fully broken in the transition state and consequently, the structures 1 and 2 may be considered as important contributors to the transition state. The structure 1 is much more significant since and alkyl group destabilizes an adjacent negative charge, therefore, the less substituted alkene predominates. In case of an alkyl Bromide, the transition state will be more alkene-like.

The transition state is the hybrid of structures that help in explaining the orientation observed in the four 2-halohexane. With X = F the orientation is largely Hoffman while with X=I the orientation is predominantly saytzeff. Two factors may be considered, firstly the bond strengths lie in the order C-I < C-Br< C-Cl <C -F and secondly the electron withdrawing effect of X follows the order F > Cl > Br > I. In the fluorine case, the primary hydrogen is preferentially extracted by base since it allows the negative charge to develop on a primary carbon which can best accommodate it to give Hoffman orientation. The Rate of E2 reactions and other aspects:

The rate of a reaction increases with the increasing strength of the base. It also increases with a good leaving group and the leaving group ability parallels the stability of the anion. Ethers and alcohols do not undergo E2 elimination reaction since alkoxide and Hydroxide ions are relatively high energy species while a sulphonate displays this reaction since sulphonate anion is very stable (the conjugate base of a strong acid).

The stabilization energy associated with conjugation in the product formed is partly developed at the transition state. Thus CH2=CH-CH2-CH2-Br eliminates HBr to give butadiene more readily when compared with 2-bromobutane.

It has been seen that during E2 elimination saytzeff rule predict the formation of a more substituted alkene and the exceptions are when the leaving group is poor. In this case, negative charge will build upon the Carbon from which the proton is lost and therefore the carbanion stability determines the major alkene product. Moreover, in several eliminations, the less stable alkene predominates. Example: when the base is bulky and sterically hindered, the conjugate alkene is more stable even though it may not be the most substituted alkene. It is more stable than a non-conjugate product due to resonance. The transition state in such cases has a partial development of conjugation which provides it with enough stabilization. Thus the elimination gives the conjugated product as the major alkene though it is not highly substituted.

An elimination reaction is not only confined only to those reactions in which one of the leaving group is hydrogen. Reactive metals such as zinc and magnesium are capable of removing halogens from 1,2-dihalides to yield alkenes. Like other E2 reactions, this reaction also proceed by a concerted trans elimination process. Thus dl-and meso-2,3-dibromobutane yield cis and trans-2-butenes, respectively on treatment with zinc.

A similar treatment of Trans-2,3-dibromo-2-butene with zinc results in the formation of dimethylacetylene.

Books You Should Buy